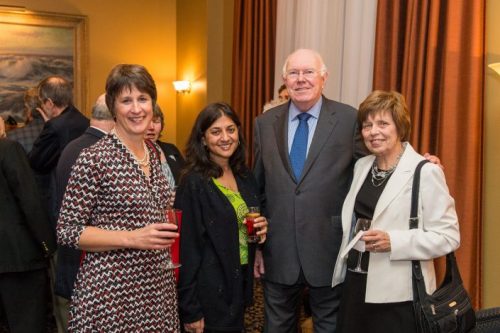 The ESCC is delighted that Martin Murphy has been named one of the recipients of the 2019 Sheila & Victor Goldbloom Community Service Awards, an award presented to English-speaking Quebecers who have made a significant contribution to the community. A man of multiple talents and of wide, professional experience, Martin Murphy has been consistent in his willingness and aptitude to be of service to the community.

After a number of years with CN, Martin shifted to life as an educator and administrator.  As such he served at different times as President of the Provincial Association of Catholic Teachers and of the Association of Directors of English Schools, as well as being a Director of the Canadian Teachers’ Federation. He retired in 1994 as Director of Curriculum Services for the Baldwin-Cartier School Board.

After retirement from the education sector, Martin undertook another career. In 1995, after two years as President, Martin was appointed as Executive Director of the English-Speaking Catholic Council and remained in that position until 2012.  During this same period, Martin played a key role in the establishment of two very important community organizations which, in different ways, serve the English-speaking community of Quebec. Between 2000 -2003 Martin was Chairman of the Community Health and Social Services Network and for 5 years, 2002-2007, the President of the Quebec Community Groups Network.

During his tenure as Executive Director of the ESCC, twenty briefs were presented to federal and provincial governments at public consultation hearings.  The subject of these briefs ranged from health & social services to education, from reasonable accommodation to seniors’ living conditions.  Any matter which touched upon the welfare of the English-speaking community in Quebec was a matter to which Martin and the Council would turn their consideration.  Well known for both his attention to detail and his memory for personalities and events, Martin proved time and again to be an invaluable resource and organizer for the community.

Generous with his time and committed, in both word and deed, to the principle of a vital minority-language community, Martin has been the example of disciplined and thoughtful leadership for the English-speaking community of Quebec and is a worthy recipient of the Goldbloom Award.

The other recipients of the 2019 Community Service Awards are Senator Joan Fraser and humorist Josh Freed. Joshua Arless, school commissioner of the Lester B. Pearson School Board, has been chosen for the fifth annual Young Quebecers Leading the Way Award.