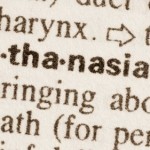 The subject of end-of-life-issues, specifically those of assisted-suicide and euthanasia, have dominated Canadian headlines over the past few years. On June 5, 2014, the Quebec legislature passed its law on medical-aid-in-dying, Bill-52.

Some eight months later on February 6, 2015, the long-anticipated ruling of the Supreme Court of Canada in the matter of Carter v. Canada (Attorney General) was handed down. The SCC found that the federal law prohibiting physician-assisted suicide deprived Canadians suffering from serious and incurable illnesses their Section 7 (Charter of Rights & Freedoms) right to life, liberty and security. The SCC has given parliament one year from the date of the ruling to draft legislation in this matter.

Given the October 19th federal election, parliament is sure to ask for an extension to that deadline. But in July, the government struck a three person committee to examine the issue and to initiate a consultation on legislative options for assisted dying.

The ESCC encourages its members to go to the website of the Consultation on Legislative Options for Assisted Dying to sign-up for updates on the process and make your voice heard.

Please click here for the letter written by the ESCC in response to the SCC ruling on Carter v. Canada.