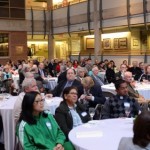 On November 14, 2014 the ESCC hosted, after a ten year hiatus, the Catholic Community Rally. In all there were 42 movements and organizations which work and minister to English-speaking Catholics in Montreal represented.

Some 250 people attended the Rally and both Archbishop Lépine and Bishop Thomas Dowd were in attendance. There was consensus among the participants that, not only had the 2014 Rally been a success, but that it was a vital tool for community development and that a commitment to making the Rally a biennial event would be ideal. Plans for Rally 2016 are already underway! See pictures from the last rally which was held in 2004!